How to get started with Athlete - in three steps

To set up Athlete to sync your Etsy orders with Shopify, as well as customers and shipments, follow the steps below. 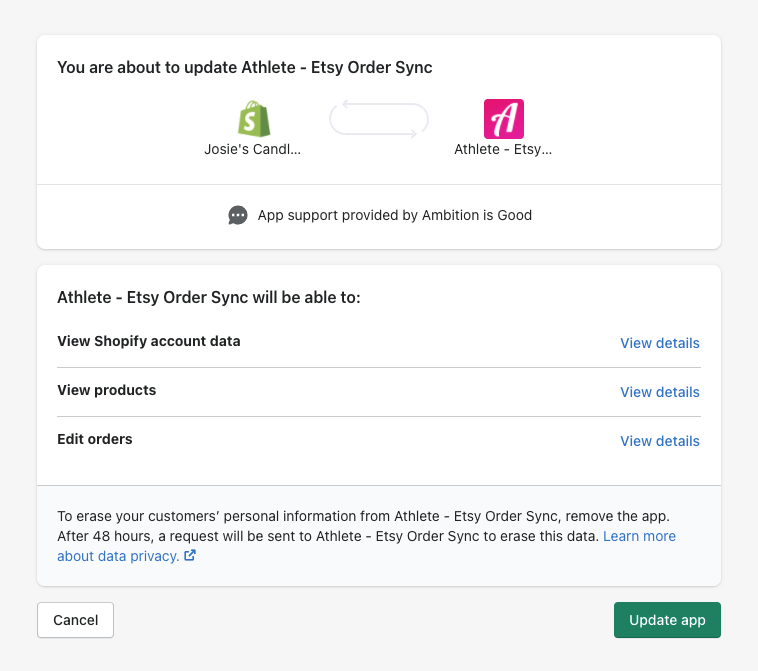 Step One: Install Athlete from the Shopify App Store.

Athlete won't fetch any orders from Etsy until it is connected to your Etsy shop. 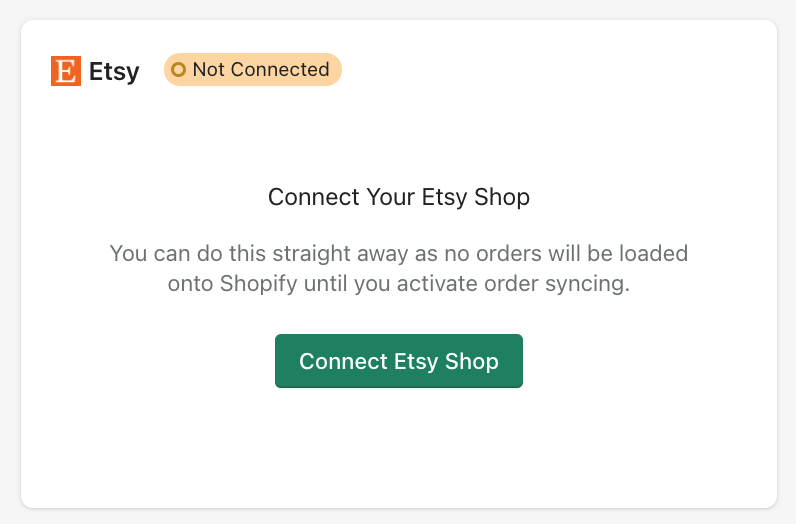 Click Connect Etsy Shop to authorise Athlete for Etsy access. This will take you through to Etsy's app approval flow.

Athlete will now fetch orders from Etsy, but will not load them onto Shopify until you enable order syncing. 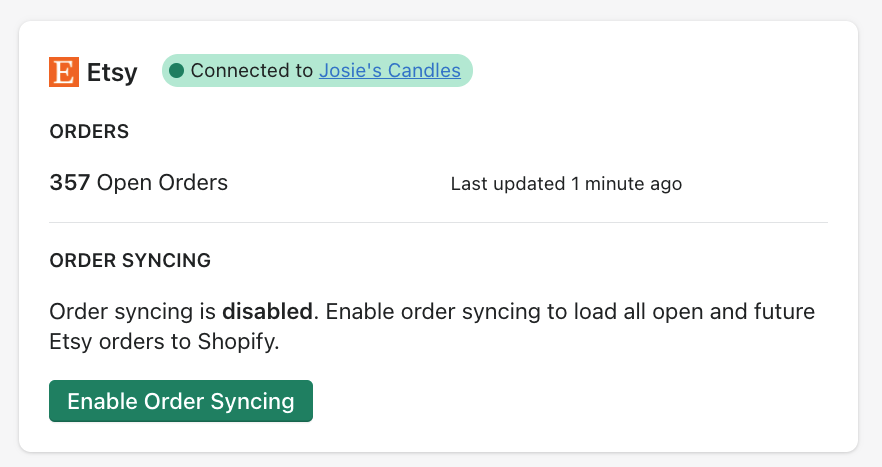 We love talking to merchants to help them get installed: drop us a line! hello@sellwithathlete.com.

Does Athlete require my products to have SKUs on Etsy and Shopify?
Good news! SKUs are not required for order syncing to work. And if you do have SKUs, Athlete will use them.

When Athlete syncs an order to Shopify, it looks for SKUs on the Etsy listings and matches them to Shopify products.

When this match is found, the items on that Shopify order are linked to your Shopify products.

When this match is not found, the Shopify order is loaded but the items on that order are not linked to Shopify products. This means these orders can't update inventory, and may not work with other integrations such as dropshipping apps. To resolve this, you should update the product to have matching SKUs on both marketplaces. Subsequent orders for that Etsy listing will then be successfully linked to the Shopify product.

When we ship or cancel an order on Etsy, when will it be updated on Shopify?
Etsy shipment and cancels are synced to Shopify within 30 seconds or so.

If an Etsy customer has selected upgraded shipping, will that be reflected on Shopify?
Yes - the exact shipping method and cost will be shown on the Shopify order.

If an Etsy customer has chosen different shipping and billing addresses, will that be reflected on Shopify?
Yes - the shipping address for the order will be loaded to Shopify, whilst the Shopify customer record will be updated with the billing address.

Does Athlete sync Etsy customer details to Shopify?
Yes - the customer's name, email address and billing address are loaded to Shopify. If these details are updated on Etsy on a subsequent order, Athlete will update them on Shopify too.

Will full payment details be loaded to Shopify?
‍Yes - Athlete syncs all payment amounts so you can do full financial reporting on all your orders, even if you end up shipping them via Etsy.

If I ship an order on Shopify, will Etsy be updated?
Yes - when an Etsy order has been loaded to Shopify and then shipped from Shopify, Athlete will update Etsy.

Is Athlete secure? Where is its data kept?
Athlete is hosted by Heroku, one of the world's leading hosting platforms. Heroku operates stringent security procedures and processes and is trusted by some of the world's biggest companies (Heroku is owned by Salesforce).

Athlete's data is kept in the USA (the same as Shopify and Etsy) within Heroku's data centers and is continually backed up.

Is Athlete compliant with GDPR and general data security standards?
Yes - we follow the stringent GDPR processes laid out by both Shopify and Etsy, and adhere to secure coding and data handling standards. We also publish our own privacy policy which details what we can and can't do with your data.

Athlete has special permission to access Etsy customer data, granted by additional approval within Etsy. We act as a processor for your customer data, and can never use it for purposes other than order and customer sync between Etsy and Shopify.